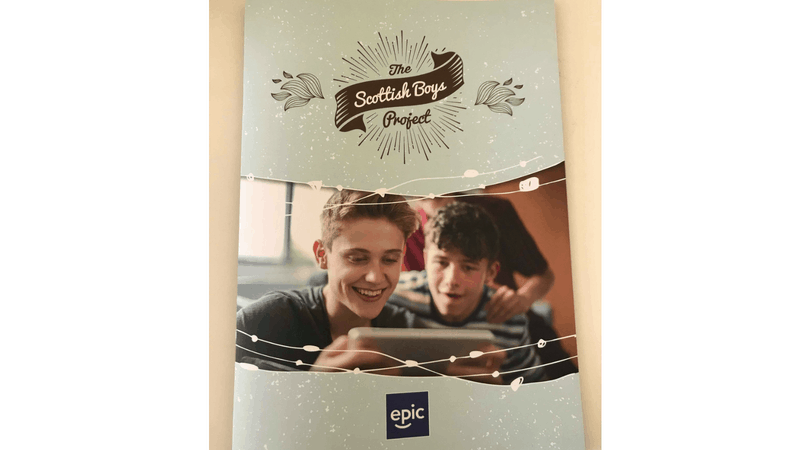 The booklet for EPIC Assist Charity Scotland’s boys’ projects is hot off the press and ready to be used for the first time this autumn.

EPIC follows up the success of using a booklet to accompany its girls’ projects by launching a new and updated version tailored to its upcoming boys’ projects. The 16-page booklet will be used as an additional resource for illustrating and consulting the topics discussed throughout the projects.

The booklet for the boys’ projects will to a great extent align with the different topics of the project sessions and is divided into seven different sections. These are communication, self-awareness, healthy eating, physical activity, gender roles, stress relief and self-health. Furthermore, it contains some delicious and healthy recipes as well as contact details for services that can provide further help and guidance on the issues discussed in the projects.

The content of the boys’ project booklet is heavily based on the girls’ project booklet which EPIC produced last year. However, due to gender-specific challenges, some sections have changed. For instance, the self-esteem and body image sections have been swapped with self-awareness and gender roles respectively. These sections focus on elements such as recognising, accepting and dealing with different emotions as well as combating traditional gender roles. Minor changes have also been made to some of the other sections. In addition, the design of the booklet has been updated and altered to suit boys’ projects.

EPIC is excited about the prospect of utilising the boys’ project booklet for several projects in the future! It will be used for the first time in the Lothians Boys Project, which EPIC will pilot with the football club Tranent Colts and Sanderson Wynd’s Primary School in Tranent. The John Watson Trust-funded project will take place after the summer.